FIRST AND AGAIN by Jana Richards 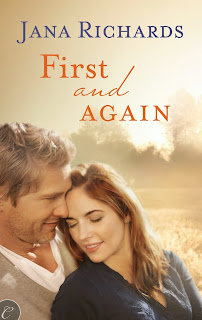 FIRST AND AGAIN by Jana Richards

Returning to Paradise, North Dakota, to move herself and her daughter back in with her mom, was the last bitter pill Bridget Grant had to swallow after a failed marriage and business. She had no choice, she was penniless and in order to get her feet back under her, she would have to suck it up and work in her mother's bar and motel, instead of what she trained for, as a chef. Her relationship with her mom and sister had always been strained, to say the least, so being in close proximity would take some adjusting. But, she had promised her daughter that she would do whatever she needed to save up enough, so she could relaunch her business and leave Paradise behind once again.

Jack Davison is surprised to find that Bridget hasn't changed much at all in twenty years, she is as beautiful as the day she left him behind. Owner of a ranch just outside of town, Jack caters to tourists wanting the 'western' experience. When he finds himself without a cook for an important customer event at the ranch, he is able to strike a deal with Bridget, whose daughter is in desperate need of a healthy distraction, horses. And as it turns out, Jack is a single parent of a rather special girl himself.

With Jack's kitchen well in hand and the girls spending a lot of their time in the stables, Bridget and Jack automatically see more of each other. When almost forgotten sparks start coming alive again between them, both have their own reservations about taking their re-found friendship to another level. Bridget's plans for Paradise seem to be temporary, and Jack is a tad gun-shy, based on  his experiences.

Since neither can seem to keep their hands off each other, casual seems to be the agreed upon way to proceed. Although between the four of them, they are starting to come awfully close to resembling a family. The hearts that both Jack and Bridget were so carefully protecting? It appears they may already be lost.....

'The grass is always greener on the other side'

Funny how a lot of stories, regardless of what the plot seems to be, have a return to the hometown as a backdrop. So does this story, it tells of disillusionment, betrayal, family dysfunction, and how to rise above, and learn to see your own role in what you have always perceived to be the fault of others, circumstances or fate. Sometimes you have to go back to where you came from, in order to see where your place is.

I see a tremendous amount of character growth in this story. Quite a few valuable lessons here. Everyone seems to be convinced one way or another, that they are doing the only absolute best thing possible. Problem is, everyone has tunnelvision. It takes some pretty hard knocks to shake those blinders off and it is heartbreaking to discover, that despite the absolute best of intentions, you may not have done the right thing after all. That happens a lot in this story....... having to take ownership for the way history has played out.

On the flip side of that, is with taking ownership, comes the ability to finally recognize the beauty of what you have before you.

In the case of FIRST AND AGAIN, there is a family relationship that can finally be appreciated at full value, one child that can finally see the benefit of a loving father and another who will finally have an opportunity to find out how far her abilities can reach. Then there are Bridget and Jack, who are no longer held back by misconceived ideas or expectations.

It was a pleasure to read this book.

**ARC courtesy of NetGalley and Carina Press in return for an honest review.**