THE CHOCOLATE HEART - by Laura Florand 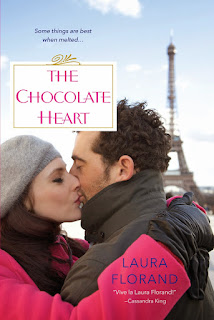 Spoiled little rich girl, that is how Summer Corey is seen by the world, but nobody has ever bothered to look beyond the surface. After a childhood filled with endless hotels, nannies, boarding schools, buy offs and the inevitable adolescent self-destructive rebellion by Summer, she disappears from the spotlight and her family's control, to find solace with an underprivileged island community. Far from the papperazzi, public opinion and her father's scorn, she is finally free to live her life as she wants, teaching the island's youth and enjoying the the simple but fulfilling life. Until a need in her community forces her to make a deal with her father that puts her in charge of a famous hotel in Paris, the city she loathes.

Son of a gypsy and raised to be a beggar in the Paris Metro, Luc Leroi has climbed his way out of the gutters to become one of the most renowned pastry chefs in Paris and chef pâttisier at a three Michelin star restaurant. Luc loves Paris, he feels he has conquered her, from the depths of her bowels to the heights of the Eiffel Tower. And when a stunningly gorgeous creature, obviously fatigued from travel, falls into his arms in the lobby of his hotel, he thinks he may have hit the proverbial ball out of the park........ That is, until she opens her mouth, and offers him a tip for his services!! He instantly recognizes the attitude if one who has grown up with too many privileges, a spoiled brat!

Despite her long journey and her exhaustion, Summer is instantly drawn to the Greek god of a man who caught her coming into the hotel. Shocked to find out he is working for her as chef, she tries to play off her indecent proposal of their initial meeting when she was barely conscious. Luc, although quite curt with Summer, is nonetheless still very taken with her and finds himself inspired to new culinary creations. Not a man comfortable with expressing in words, he attempts to show Summer through his dessert creations how he feels.

With a mutual attraction growing, Summer's smiles slowly become more genuine and Luc's attempts at wooing her with his desserts more intense. But in order to get Summer to taste Luc's intentions, he must first break through her shields, and find what is real beneath the veneer.

The characters are multi-dimensional and not at all predictable, which is such a refreshing delight. Summer is easily pegged initially as spoiled socialite, but shows herself to have more depth and emotion and social intelligence than anyone gave her credit for. Unfortunately, expectations on her had always been incredibly low, therefore there were many qualities she could not even recognize in herself.
Luc had seen two different levels of upbringing, one full of emotion but with little expectation, and later he was raised with no emotion but expectations were at a maximum and Luc excelled. He thrived professionally, but was emotionally insecure and underdeveloped.
Both had found a certain security in viewing the world in a way that was safest for them, but to each other, they were the catalyst that allowed them to see a broader perspective.

The writing of Laura Florand has such a distinct French flavour to it, and not just because of the occasional use of a French word or sentence here or there. It is the underlying passion in the interaction between people, the way the senses are concurrently engaged, the way I can imagine the hands flying when dialogue is taking place, or the expressive faces that just seem to hold a bit more drama.

I'm not sure what it is that gives Ms. Florand's writing such a distinct French flavour; the passion, the tastes and textures, the humour, the heat....... And before you ask, I am European born, have frequented France and Paris specifically, so have an idea of what a French flavour might be. All I know is, she makes me crave romance and 'pain au chocolat', and I haven't eaten one in at least a decade or more!!!

✨A brilliantly scrumptious, seductive and witty assault on the senses!!✨

**ARC provided by NetGalley and Kensington in return for an honest review.**