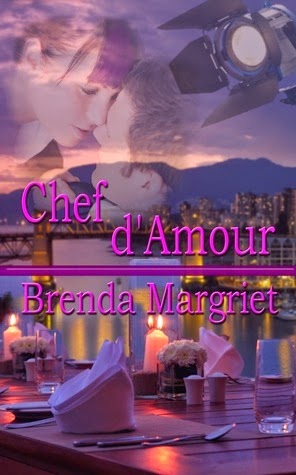 "All Jemma Hedge wants to do is care for her ailing grandmother, and a job behind-the-scenes on the reality show Reservations for Two is the perfect opportunity. There's one rule—no fraternizing with the cast. Easy enough, until she meets the show's sexy bachelor, Paul Almeida, the smouldering restaurateur she's already had the displeasure of meeting.

Paul risked more than money when he opened his dream restaurant. To give his fantasy a fighting chance he accepts the role of Chef d'Amour on a brand new reality show. Flirting with the women vying for his heart should keep him too busy to worry about overstepping boundaries with the crew, until he spots Jemma.

The ingredients for love are at hand. Can Jemma and Paul create the perfect blend?"

Brenda Margriet was an unknown writer to me, but after reading CHEF D'AMOUR I wouldn't hesitate to pick up another book by her should it cross my path.

The story is one of a woman struggling to survive while carrying the burden of responsibilities, and a man determined to prove himself in the eyes of his loved ones. Neither is accustomed to having someone at their back, but find it in each other nevertheless.

Jemma is already stretched thin, but her responsibilities increase day by day. Her strength of character is all that keeps her afloat at times and when an opportunity comes along, she throws herself in 100%, as is her way. Trying to steer clear of anything that might have negative consequences on the newly found balance in her life, Jemma avoids romantic entanglement. But Paul makes makes it hard to resist, as he stacks up the benefits against the drawbacks.

As restaurant owner, he has wanted nothing but to prove himself able to make his place a success. Not so much for financial gain as for parental approval. A decent man with lofty goals, he gives in to a tempting, but rather unconventional opportunity to put himself and his restaurant in the spotlight. The notoriety and dollar amount attached are a definite bonus, but he didn't expect to receive a lesson in humility and sacrifice as well. From a woman who was starting to hold more appeal than any success could.

Well written with a substantial amount of grit on the part of the heroine, some subtle humor, heated love scenes and stunningly realistic and heartbreaking scenes of human decline. In some parts of the book, in particular the interactions with Jemma's grandmother, I was fully emotionally engaged. Well done!

✨A hero in the kitchen, a heroine with bite and Grandma tugs at the heartstrings...✨

**Copy provided in return for an honest review**