GOING LONG (Waiting on the Sidelines #2) by Ginger Scott 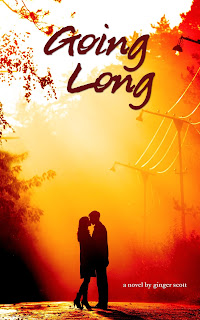 Points of sale links will be added as soon as they become available.

Since she first saw Reed at fourteen, Nolan Lennox had been his. High school had been a struggle, but what had started out as a friendship with Reed finally grew into what she had hoped it would be. But their love had not always been without bumps.

Reed Johnson is feeling the pressure. His football career is about to take off, if he opts to go for this upcoming draft, but that would involve Nolan and he needs her input. Reed has known for a while now, that Nolan is his future, but she still seems to feel insecure at times. She doesn't want to talk about the draft.... she would prefer to stay in the moment, even though she knows it can't be avoided forever.

Under the influence of alcohol, false impressions and tragic events, the deep love between Reed and Nolan is once again tested to its limits. And it seems there are a few individuals who are more than willing to drive any wedge deeper for their own benefit. Now is the time to find out whether their love is mature enough to work through the misconceptions and the lies, to find their truth again.

Again, fabulous! Ginger Scott's second book of Waiting On The Sidelines is a continuation of the heartbreaking love story of a fragile young girl, Nolan, and the new quarterback hotshot, Reed, who have now entered college.

Nolan and Reed are in a more mature, committed relationship, freely expressing their feelings for each other. But they still are not fully communicating everything, still holding back, not quite trusting the other's reaction. That part of their relationship still has to mature, the trust has to grow. Knowing that even if you have bad news to impart, your love will not run away from you. Neither of them quite trust that to be true at this point, and so they keep important information to themselves afraid of what it might cause. The irony is, keeping that information secret is the exact thing that causes all the problems that follow. Secrets always do cause problems, at one point or another. The truth, sooner better than later, is always the way to go. A lesson both Reed and Nolan learn. Communication is crucial, trust is imperative, love is a necessity.

The insight that Ginger Scott shows when describing thoughts and feelings from the perspective of both Reed and Nolan is quite impressive. She makes the characters very genuine. I can follow along in their thoughts and feelings without needing to go outside of myself. It also makes them real enough for me to want to slap them upside the head from time to time! For being dense, for doing something stupid. Just like  I would one of my own.

✨A captivating and touching story of innocence lost.✨

**ARC courtesy of author in return for an honest review.**
Posted by Unknown at 11:08 AM