SLEEP WITH THE LIGHTS ON by Maggie Shayne 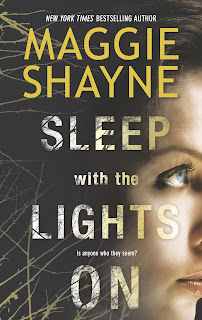 SLEEP WITH THE LIGHTS ON by Maggie Shayne
(The Brown and De Luca Novels #1)
Advanced Reading Copy
Published:September 24, 2013, Harlequin MIRA

~Rachel de Luca has found incredible success writing self-help books. But her own blindness and the fact that her troubled brother has gone missing have convinced her that positive thinking is nothing but bull.

Her cynicism wavers when a cornea transplant restores her sight. The new eyes seem to give her new life, until they prove too good to be true and she starts seeing terrifying visions of brutal murders crimes she soon learns are all too real.

Detective Mason Brown's own brother recently died, leaving behind a horrific secret. In atonement, Mason donated his brother's organs, though he's kept the fact quiet. Now he wants to help Rachel find her brother, but when he discovers the shocking connection between her visions and his own brother, he suddenly has to do everything in his power to save her from a predator who is somehow still hunting from beyond the grave.~

This book was an absolute blast to read!!!! And I cannot wait to read the next one, WAKE TO DARKNESS, which is due out November 26. But first there will be a short novella released mid-October named DREAM OF DANGER, the exact date is yet to be determined.

Rachel is one of the best heroines I have ever encountered in a book. Before and after corneal transplant, she is fiercely independent, foul-mouthed like a dock-worker, loyal with family and the few friends that she has, big hearted and moody as all get out, just like a real person. She is funny as hell and doesn't beat around the bush, she has a softer side that she doesn't like to show so instead she turns prickly or flippant. This is starting to sound like a self description...... except for the part where she is young, beautiful and a very successful author!!  Theeere is the reality check!

Rachel is coping with the sudden recovery of her sight really well, in fact I would say she is running with it. Even the nightmares that come with it, she seems to take in stride at first. Until there is a direct link to current events, only then does it start freaking her out. But even freaked out, she doesn't cower, she gets pissed off, angry, and determined to get to the bottom of whatever the hell is going on. With or without Mason's help. That is one strong cookie.

Myrtle is a great addition, she softens Rachel up just a tad, enough to even out the roughest edges just in case there were some who couldn't see beyond the gruff exterior. She also provides some comical relief in tense and scary circumstances.

Faced with a split second decision, under horrific circumstances, with potentially devastating consequences, Mason absolutely did the best he could. He is protecting his family, in particular his nephews, from something that would likely ruin their lives. He tries to atone for it, but inadvertently only complicates the problem and drags more people into it. Mason's moral compass seems to be constantly tested through the story. And although not all the choices he makes are ethical or legal, they certainly are morally sound. You almost feel a dark versus light battle going on.

There is also something about Mason's mother that doesn't quite feel right with me, but I can't put my finger on it. It may be my imagination running overtime, and who could blame me after this story, or it may be something I sense that has yet to come out in one of the future stories.

The concept of transmission of any type of awareness or characteristics from a donor to a transplant recipient, is one of the creepiest things I can imagine. And truthfully, it is one of the first things I think about, when I hear about any type of transplant. When you think about the fact that a body is made up from basically all the same components, the same lego blocks, just laid out in different formations to make up the different parts, and suddenly someone else's lego blocks mix with yours..... it doesn't take much to imagine that the basic components that make up that person, are now a part of you as a person too............ Cue Twilight Zone music.

Edge of my seat!!! Loved, loved, loved the concept, the balance on the edge of science and the paranormal. A fabulous romantic potential with some sparking chemistry between Mason and Rachel and the promise of more to come. And a fan-fucking-tastic start of a new series!!

**ARC courtesy of NetGalley and Harlequin MIRA in return for an honest review.**
Posted by Unknown at 12:32 PM