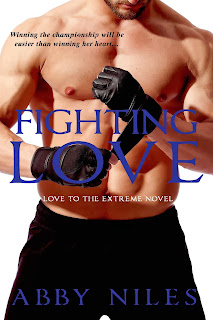 After losing his title and his career barely six months ago, former MMA fighter Tommy Sparks didn't   think his life could sink any lower, until he comes home to find it engulfed in flames. Everything he had left up in flames, all his possessions, the most treasured of his memories....all gone. Everything except for the clothes on his back and luckily the dog by his side. Only thing left to do now is to call the one person he has always been able to count on, his best friend for over twenty years.

Satisfied with her life as a veterinarian and resigned to her life as simply Tommy's best friend, Julie Rogers tries to come to terms with the fact that after twenty years of unrequited love, it is time to move on. Of course, that is perfect timing for disaster to strike and her best friend to need her to step up, something she doesn't even think about twice. Tommy is coming home with her and staying as long as he needs.

Living together may prove to be more of a challenge than they had anticipated, and not for the reasons they might have initially thought. It is not their usual difference in lifestyle, but the sudden obvious sexual interest Tommy displays in Julie that creates an uncomfortable tension, Julie doesn't trust his motivations while at the same time set afire by his heated looks and touches. Changing the framework of their relationship is a huge risk to take, especially for two people who have so much to lose....

This was the not unfamiliar 'friends to lovers' trope, but delivered in a very well considered and thoughtful way. Nothing rushed and over the top, no sudden light flash realizations, but more a tentative probing of a concept and it's possibilities and pros and cons. The difference here is too that it deals with long time friends who have seen all sides of the other, the good, the bad and the ugly, and are still there....

Tommy had very little reliable growing up, but he had Julie and she became his friend, his family, his security. Someone he could trust to always be there, so much so, he started taking it for granted. He lived hard and fully, enjoying the one thing he found he was good at, fighting. He didn't mind all that came with it either, the partying, the women, all there for the taking and when he won the championship, he started taking all that for granted too, which is what ended up costing him all of it.  He has some quick learning to do before he loses everything he has been taking for granted.

Julie never doubted the good man Tommy is, but she does doubt his maturity level. She tries moving away from her love for him, but there is no way to force feelings. For years she allowed herself to be treated as a stander-by, but once he claims her, she is not about to just stand there and be ignored. She values herself too much, even if he doesn't and it will take a tremendous amount of convincing her otherwise.

What I enjoyed about this story is that a lot of what transpires between Tommy and Julia is so recognizable as part of relationship dynamics. When I think of the description of a scene in a pub where the two of them are along with a group of his friends after a training session, it is a scene that could come straight out of my life or, I would bet, out of some other folks, as well..... Being taken for granted is a common occurrence, and something so difficult to explain, or complain about. Some people just don't get it....luckily Tommy does, eventually!

✨A sizzling, engaging and insightful story about redemption.✨

**ARC provided by NetGalley and Entangled Select in return for an honest review.**